The North Carolina Department of Transportation (NCDOT) significantly improved public participation in the State Transportation Improvement Program (STIP) project selection process. The increased public participation also enhanced collaboration between NCDOT and its regional planning partners. While NCDOT did not use PlanWorks to improve the STIP public engagement, the PlanWorks Stakeholder Collaboration Application will be very useful in helping other agencies interested in this approach.

In 2013, the North Carolina Department of Transportation (NCDOT) changed the funding formula for the State Transportation Improvement Program (STIP) to a points–based prioritization system based on data and local input. This was necessary as part of the Strategic Transportation Investments law passed by the State legislature. Concurrent with this change, NCDOT sought to improve public involvement for STIP development, as public feedback is considered by NCDOT and the local planning organizations when projects are submitted for evaluation and scoring. In 2016, the NCDOT Public Involvement Group launched a very successful on–line interactive portal where constituents could learn about projects considered for inclusion in the STIP and give feedback on their priorities. Participants first selected their top priorities among transportation goals, and then selected priority projects for their region constrained by a limited amount of funding.

NCDOT received over 3,200 visitors to the STIP public involvement portal, a significant increase over the 160 visits in the prior outreach campaign. Public comments collected from this exercise were distributed to NCDOT Division Offices (regional branches of NCDOT which build and maintain state infrastructure), Rural Planning Organizations (RPOs), and Metropolitan Planning Organizations (MPOs) to help them better understand public interests when applying local input points to projects for possible STIP inclusion.

In 2013, the North Carolina Legislature passed the Strategic Transportation Investments law, which established a data–driven ranking system to select projects for inclusion in the STIP. The goal of this system was to provide greater transparency in the process of transportation project selection and to improve the efficiency of State transportation funding. Using this system, funding for the STIP is divided into three categories (State Mobility, Regional Impact, and Division Needs). Projects considered for the Regional Impact and Division Needs categories receive scores based on 70% and 50% (respectively) for data–based criteria, and 30% and 50% (respectively) for local input. The local input is determined by each planning organization and NCDOT Division. These agencies create their local input methodologies based on State guidance, and for the 2018–2027 STIP were required to utilize at least one qualitative measure and one quantitative measure. Public comments from the statewide outreach process are one option for a qualitative measure.

The traditional approach for public involvement on the STIP in North Carolina has been a series of public forums across the state accompanied by small meetings with local elected officials. In the mid–2000s, NCDOT began to incorporate a data–driven, performance–based formula into the STIP project selection. After developing two STIP documents using this formula, the North Carolina State legislature passed the Strategic Transportation Investments (STI) law, which requires NCDOT to select projects for the STIP based on a transparent, data–driven formula. The STI called for the formation of a workgroup, made up of representatives from NCDOT Divisions, MPOs, RPOs, and other invested agencies, which would assess the results and process of each STIP. The workgroup has the power to make adjustments to the scoring methods (within limits) in order to continually improve the process. The new data–driven formula is called NCDOT Strategic Transportation Investments (Figure 1).

MPOs, RPOs, and Divisions have noted that the scoring process has been a more effective and transparent method of selecting projects for the STIP as compared with previous project selection processes. Selected projects appear more closely aligned with State and local priorities and public input than in prior years.

PlanWorks Programming key decisions apply to both TIP and STIP development. In this case study, project prioritization occurs at the state level and applies to the STIP.

MPOs, RPOs, and NCDOT Divisions provide input on projects for inclusion in the STIP based on local methodologies. Public input contributes to the qualitative scoring requirements.

NCDOT's Public Involvement Group tested on–line engagement tools, along with other outreach methods, to remove barriers to participation. Some of these barriers include lack of time, transportation, or other conflicts preventing people from attending in–person meetings. In 2015, the Public Involvement Group began working with MetroQuest, an on–line public participation service provider, which helped the agency develop an online platform for the public involvement process (Figure 2).

The platform consisted of an interactive map populated with proposed projects across the State. Each project was defined by mode, cost, and other pertinent information. As a participant entered the site, they read a short overview of the process and were given a budget for their funding region. Participants would then select projects to include in the STIP, "spending" their budget until they ran out of money. This exercise helped NCDOT understand which projects were most important to residents, and helped residents understand the process, budget constraints, and how various projects were proposed to meet higher level goals of safety, accessibility, economic development, etc. Participants responded well to the gamification of prioritizing projects for the STIP.

Public response to this online platform was exceptional. Participation increased to over 3,200 people from 160 people in the previous STIP development process. In addition to the extraordinary increase in the number of participants, NCDOT saw a significant increase among young adults aged 25 and under, who have historically not engaged with the transportation planning process. The cost of implementing the online platform was marginally higher than previous engagement efforts; however, the efficiency of the platform reduced the cost per participant from approximately $500 per person to $50 per person. Online platforms have a greater ability to scale efficiently than traditional engagement efforts, such as in–person meetings or mailings.

NCDOT's Public Involvement Group attributed the success of the approach in large part to the attractiveness and ease of use of the online platform. However, their marketing and engagement outreach were also likely strong contributors to the increase in participation. NCDOT widely advertised the MetroQuest platform through a channel of partners and stakeholder groups across the State. NCDOT used press releases, videos, flyers, mass email campaigns, radio advertisements on English and Spanish language channels, local public service announcements on television, and targeted advertising working with college and university groups, Hispanic/Latino groups, multiple State agencies, and groups working to represent underrepresented and underserved demographics. The MetroQuest approach was a significant departure from the traditional NCDOT public involvement method. The public responded to this change as well as the more extensive outreach effort with greater interest than anticipated.

The Public Involvement Group distributed the public involvement results to all NCDOT Divisions to help inform their local input points being assigned to projects for the STIP. The results were also shared with RPOs and MPOs, but these organizations conduct their own public engagement activities during the prioritization and project selection process in addition to the efforts by NCDOT. 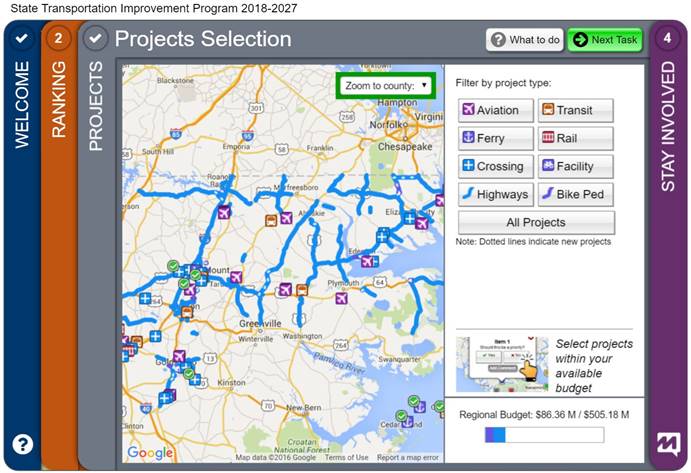 NCDOT Divisions, RPOs, and MPOs each develop their own methodology to score projects for inclusion and prioritization in the STIP. They develop methodologies to address each agency's local goals and priorities; however, the methodologies must comply with State guidelines and be publicized for transparency.

Division 10 (which includes Charlotte and Anson, Cabarrus, Mecklenburg, Stanly, and Union counties), found the public comments from the MetroQuest exercise helpful in both confirming that the data–driven methodology for scoring projects aligns with public interest, and in tipping the balance for closely ranked projects. Division 10 reviewed comments from MetroQuest and their own coordination process with the local planning organizations. Public input collected through MetroQuest influenced the Division's decision to award points for two proposed segments of a road widening project, Poplar Tent Road.

Poplar Tent Road was identified by the Division as a candidate for widening in 2009, although it failed to receive funding until the 2018–2027 STIP. Two separate segments of the road suffered from congestion and delays: the George Liles Parkway segment and the Derita Road segment. Division 10 assigned initial Local Input Points for each segment using their standard methodology, then adjusted the score based on public input and meetings with the Cabarrus–Rowan MPO. Although the two segments had similar quantitative scores, there was stronger public support for the Derita Road segment. The proposed widening of this segment received the second highest number of public comments among all projects under consideration by the Division. This clear request from the public, along with support from the MPO and a high quantitative data score solidified the Division's decision to prioritize and assign local input points to the Derita Road segment over the George Liles Parkway segment.

Division 10 and its partner RPOs and MPOs work together to coordinate their methodologies for local input points. The Division and RPOs/MPOs realize that by agreeing on similar goals and similar point allocation, their priority projects will receive more local input points overall to be competitive in the STIP prioritization process. While each Division, RPO, and MPO may develop their own methodologies to allocate local input points independently, the collaboration between Division 10 and its RPOs/MPOs demonstrates a cooperative effort to prioritize local and regional needs.

NCDOT has used the MetroQuest platform to solicit input for individual projects and will also use the platform to inform the 2020–2029 STIP. The agency built on the successes of its activities for the development of the 2018–2027 STIP and added some additional activities and functions to the process, including: 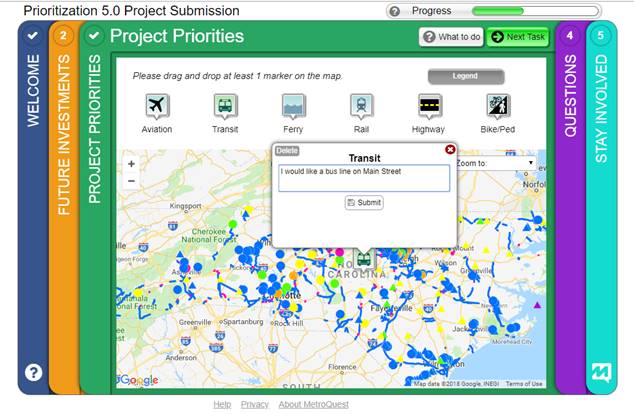 NCDOT's innovative use of an online engagement platform for the STIP project selection resulted in four key outcomes.

Increased diversity in age groups of participants. NCDOT saw a significant increase in participation among adults aged 26–40 (35 percent), and among young adults aged 25 and under (4 percent). While a 4 percent response may not sound significant, this age range has been historically very challenging to engage in public meetings and other outreach activities. NCDOT's Public Involvement Group attributed the increases in response among these groups to the ability to comment online or via mobile phone, at a time convenient for them.

Cost savings. In addition to the increased number of participants, the cost per participant sharply dropped from approximately $500 per person to $50 per person.

Support for Division, RPO, and MPO local input point assignment process. This platform allowed NCDOT to collect comments statewide from the public and deliver to each Division, RPO, and MPO to inform their local project ranking. Comments that Division 10 obtained through the MetroQuest platform helped them prioritize between two segments of a project for point assignment and confirmed that other projects aligned with the public's priorities.