This case study documents the experiences of three agencies (two cities and one MPO) in collaboration to support the identification of performance measures that support their transportation plans. While none of these agencies used PlanWorks the Planworks Performance Measures Application will be very useful in helping other agencies interested in this approach.

From July to September of 2014 the Southeastern Transportation Research, Innovation, and Development and Education (STRIDE) Center at the University of Florida funded five workshops to help organizations develop performance measures to use in transportation and comprehensive planning. Three of the workshops were highly focused on the MAP-21 requirements for performance-based planning and programming and occurred prior to the final planning rule release. These workshops were hosted by a North Carolina State University team of researchers and included two cities and one metropolitan planning organization (MPO). The purpose was to develop a list of performance measures to carry forward in the participants' ongoing planning process.

Each workshop included a broad selection of participants to develop performance measures that address the local needs. The unique interests and challenges of each location was the initial context for the workshops.

Members of the STRIDE team solicited interest in potential host organizations by sending emails to the membership of planning-related organizations, including the Transportation Research Board (TRB) and the American Planning Association (APA). The team also solicited interest through the Federal Highway Administration (FHWA) and distributed handouts at the 2014 TRB Annual Meeting. As a result of that solicitation, the NCSU team made connections with two cities and one metropolitan planning organization that were currently engaged in a planning process: the French Broad River MPO, the City of Greenville, and the City of Huntsville.

An initial list of context-specific livability performance measures from the Federal Highway Administration (FHWA) Community Vision Metrics tool was the starting point for each workshop. A key feature of this effort was to address the value of infrastructure investments from the perspective of livability. According to USDOT, "Livable communities are places where transportation, housing, and commercial development investments have been coordinated so that people have access to adequate, affordable, and environmentally sustainable travel options." Workshop participants were given a list of performance measures selected for specific goals, and asked to add or remove measures that were not appropriate for that planning context; allowing more time during the workshops for selecting performance measures in alignment with goals and actions.

Though the focus was on performance measures, the City of Huntsville had not developed goals. In that particular case, the performance measure work was preceded by a visioning exercise. Participants were guided through the consensus-building Technology of Participation (ToPs) method, and were asked 'What will a successful transportation system look like in 2024?' After recording their responses, participants worked in small groups and, using structured discussion methods, selected the best ideas from individual responses. All participants worked together to cluster ideas around similar intentions, and 'like' ideas were identified using a common symbol. Finally, participants named the clusters and replaced the symbols with a phrase that would manifest as the group's goal statement. This approach proved particularly useful for grounding goals in tangible outcomes and to refine the goal statement as necessary. Those goal statements were then recommended for inclusion in the city's comprehensive plan. The Huntsville participants appreciated the ToPs approach and have incorporated similar methods into other planning exercises.

Each workshop and the subsequent use of performance measures is described below. As the information indicates, success was largely dependent on the ability of the agency to carry the workshop outcomes forward.

In 2013, the Mayor of Greenville, John Cox, initiated an update of the City's strategic plan, which had last been updated in 1993. In 2013, the City selected Orion Planning group to initiate development of the plan. Also in 2013, the City received a letter from the Environmental Protection Agency (EPA), indicating that the City was guilty of violations against the Clean Water Act. This letter would come to play an important role in determining whether the City would successfully implement the plan.

The Greenville workshop took place in 2014 and began with a brief educational component to ensure that participants who had not been actively engaged in the planning process would begin subsequent discussions on equal footing. The workshop presenters provided goals for the workshop, and an overview of the current planning effort underway. Participants were also provided an overview of recent planning efforts, the work to come, and the principles of performance management. Workshop participants were largely non-technical individuals from the community who donated their time in support of the city's comprehensive plan.

The City faced a particular challenge in implementing the update of the region's strategic plan. On Mayor Cox's last day in office, he signed a Partial Consent Decree with the EPA, and committed the City to spend approximately $22 million to modernize and repair the City's aging sewer system. In recent years, the City has also struggled to secure grant funding that might help to support either infrastructure projects or redevelopment efforts. Consequently, the City has not advanced the strategic planning effort to the extent that was initially intended.

Although the final plan was approved by City Council in December of 2014, it has not been formally adopted. The City's limited resources continue to challenge implementation. However, the plan goals continue to be advanced by a dedicated group of City officials and residents known informally as the 'consortium'. The consortium meets regularly and annually presents a list of limited recommendations to the City Council to continue the strategic planning effort.

The consortium presented seven recommendations based on the plan in 2016, and ten more in 2017. These recommendations included identifying a method for to evaluate streets most in need of repair, update zoning codes and ordinances, continue to develop a greenway system in the city, repair a walking trail in one of the parks, and maintain the MainStreet Greenville Program. Other concerns focused on the Port of Greenville and the location of Interstate 69. Several of the performance measures included in the workshop can be advanced if these recommendations are implemented. Furthermore, the recommendations also reflect livability concerns that were addressed during the workshop. However, the primary outcome of the Greenville workshop was to build awareness of performance-based planning, and provide an opportunity to deeply engage the community during the planning process.

The Huntsville workshop focused on developing performance measures to support the update of the city's comprehensive plan, which occurs approximately every five years. The City of Huntsville's Urban and Long Range Planning Manager learned of the workshops from the Huntsville Area MPO. 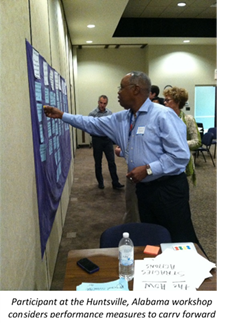 As with other workshops, participants used pre-selected criteria and measures to initiate consideration of performance measures. However, unlike other workshops, Huntsville did not have previously-developed goals. Because goals were needed to develop performance measures, the workshop organizers integrated a visioning exercise into the workshop agenda.

In the future, the Planning department hopes to provide a detailed report on performance measures on an annual basis. The reports will be delivered to the Planning Commission and City Council, and will be published as part of the MPO's Transportation Quarterly Review. The Planning Department hopes to complete comprehensive reviews every three years to help inform policy improvements.

The Planning Manager found the performance measures developed through the city workshop pragmatic, reasonable, and accessible. The workshop was reported to be "transformative", and helped to highlight the importance of measuring the outputs. In addition, the workshop illustrated the importance of the planning process built on performance measures, as well as on livability-oriented outcomes.

The French Broad River MPO workshop began with a brief educational component on MAP-21 requirements for performance measurements and some of the best practices that had been established with regard to implementing a performance management approach. Participants were given an opportunity to review national goals for the federal-aid Highway program [1] , as well as planning factors to be addressed in metropolitan and statewide nonmetropolitan transportation planning [2] .

The process of developing the measures was reported by participants to be time-consuming but useful. All of the performance measures developed during the workshop were ultimately included in the long-range transportation plan.

Moving forward, the biggest obstacle the MPO faces is finding relevant data. Several of the federally-required measures are supported by data at the state level that may not be summarized at a level that is useful for an MPO. In addition, geocoding the data may be prohibitively expensive for a MPO the size of the French Broad River. The MPO staff are hopeful that qualitative measures may play an important role with smaller municipalities that are even more data-challenged, as these measures may be easier for those smaller organizations to track.

Some of the locally defined performance measures initially struck the team as unrealistic or aspirational but are starting to be developed over time. The MPO has adapted many of the measures for use in the Congestion Management Process (CMP) as well as added new measures. Some of the measures developed during the workshop were vague and have been refined; such as "increase Multi-modal Level of Service (LOS)" measure. This has been modified to "Increase average percentage on-time performance for ART (Asheville Redefines Transit) system, for the latest year data is available." Some new measures reflect other recent guidance, such as "Increase fixed route UPT (Unlinked Passenger Trips)," which incorporates recent American Public Transportation Association (APTA) guidance. The list of measures developed at the workshop and those developed for the CMP are shown in Table 2 below.

The workshops were focused on developing performance measures for individual purposes.

The Huntsville workshop was primarily attended by technical staff from the City of Huntsville and its consultants, as the group responsible for the comprehensive plan update. The Planning Manager had previous indirect experience with performance measures at a small consulting firm, but had not been directly involved with identifying or implementing performance measures.

The French Broad River MPO workshop included a large number of technical staff who were familiar with the planning process. Prior to the workshop, the MPO had identified goals that could be used for the current planning effort.

The three planning organizations varied in focus, stage of the planning process, financial capacity, and planning product. One feature they all shared was the enthusiasm and commitment of the participants, who responded well to the exercise and committed to pushing forward with the performance management effort. The planners present all felt that performance management exercise was an effective tool to foster relationships, and the workshops were an effective way to co-create shared outcomes.

Funding may be the biggest common challenge facing implementation of performance-based planning. The French Broad River MPO does not have sufficient funding to measure every outcome without existing and relevant data. Similarly, the City of Greenville will find it challenging to 'move the needle' on a performance-based plan without funding for the improvements contained in the plan.

Livability performance measures evaluate transportation system performance by how well it supports quality of life. This perspective can make the value of transportation investments more transparent to the public, stakeholders, and decision makers. Over time investments become more meaningful and are more easily supported, creating a streamlining effect.