The High Point Metropolitan Planning Organization (HPMPO) used the Transportation Visioning for Communities (C08) product to develop a Multi-modal Vision Plan for the downtown area in the City of High Point surrounding the historic Southern Railway Depot. The plan includes recommendations for priority bicycle and pedestrian improvements as well as an evaluation for a trail head, public art, placemaking projects, and redevelopment opportunities. The priority projects and other recommendations in the plan represent actionable steps the City and/or civic and private entities can spearhead. These projects included refined ideas from past planning efforts that remain relevant and new ideas that improve safety as well as address health, economic, transportation, and equity issues. The major recommendations that make up the Vision Plan includes the following:

There is a general recognition that downtown High Point is a unique place that has both opportunities and challenges. These opportunities and challenges arise from the City's industrial beginning and continued use as the home of the International Furniture Market, an event that attracts 75,000 attendees bi-annually. Many previous plans recognize a need to activate downtown High Point with more year-round activity. There is a lack of consistent commercial activity, destinations, and housing in the Core City area.

Studies also recognize the need to re-evaluate street functionality and aesthetics. Many of the one-way pairs and wide, multi-lane roadways have been identified to be modified to increase pedestrian safety and create a sense of space.

Connections were also an important theme in existing plans. There is an understanding that connections from downtown and surrounding neighborhoods to the City's existing greenways, High Point University, and other destinations could add value to property, help attract foot traffic, and knit together the City's infrastructure.

A steering committee was formed in September 2016 to provide feedback and direction on the Vision Plan and its recommendations. The steering committee included representatives from various City departments, the City Manager's Office, High Point Transit, Forward High Point, and the Southwest Renewal Foundation. A private planning firm, LandDesign from Charlotte North Carolina, was contracted for $52,500 to help create the Plan and assist staff with planning efforts.

The steering committee met throughout the planning process with the consultant team, from analysis to final recommendations. Stakeholder interviews were held March 2016 to provide critical public input. The interviews allowed the design team to discuss recommendations of previous planning efforts and gain insight into the issues and opportunities in the study area. A public meeting was held on May 17, 2017 to solicit public feedback to assess the community support and interest for potential projects. The outcome of this effort aided in the prioritization of key projects. The Vision Plan is going to City Council for adoption in August 2017 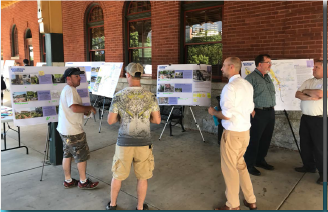 The input received from these interviews and the feedback from the public meeting helped inform the prioritization of projects identified in the Vision Plan.

The HPMPO used Transportation Visioning for Communities to develop the Multi-modal Vision Plan that outlined six priority projects and 12 stand-alone projects. Many of the projects evaluated weren't new, but were reimagined through the visioning and stakeholder processes. Others are fresh ideas adapting to current market conditions and developed with guiding principles tailored to meet the study area's needs. The projects below emerged as those with the high public support and alignment with the guiding principles:

Stand-alone projects were also called-out in the plan as they did not receive as much public support or could be completed as an element of a priority project. These included the following projects:

These recommendations will provide greater connectivity to the High Point multi-modal facility for citizens within the HPMPO. They will also be incorporated into future Metropolitan Transportation Plans and help guide future development of the downtown area. The City is introducing a Downtown Land Use Area Plan and redeveloping a site within the study area for a minor-league baseball stadium, retail and residential units, a children's museum, event center, educational cinema, state-of-the-art playground, and park.

When HPMPO applied for the SHRP2 Grant, staff did not expect to be awarded funding due to the nature of this planning project. However, once HPMPO began the process and using the Transportation Visioning for Communities product, it became clear that it would be a valuable resource for this effort. Because there were so many previous planning efforts in the study area, the Transportation Visioning for Communities product seemed "tailor-made" to HPMPO's challenges.

In the end, HPMPO felt that they ended-up with a better vision given the fact that they could develop its recommendations for the area without the influence of an additional plan.

The City of High Point requested that HPMPO apply for this SHRP2 Implementation Assistance Program grant. In the early stages, as mentioned above, the original plan was to work in tandem with the development plan for the new multi-purpose stadium and develop a transportation vision for the area. The goal was to complete one unifying vision for the area and build off the multiple plans and ideas from past studies. The problem initially was the location of the stadium had not been fully determined. There were three possible locations for the stadium, but no decision had been made on exactly which location would be selected. This decision on location was pushed back several times, in turn our study was delayed. Finally, HPMPO had to decide to proceed with the Visioning study without the location of the stadium being determined. This was a problem for High Point, due to the possibility of another study being done for the stadium after the completion of the Vision Plan. From the MPO's perspective, this was not a problem because they were creating a vision for the area surrounding the multi-modal transportation facility if the stadium was in that study area or not. Later in the process, the location was identified and is mentioned in our study. Due to the nature of this study and the potential development from the stadium construction in or adjacent to the Vision Plan study area we did not use PlanWorks for our project. In retrospect, the PlanWorks "Partner Collaboration" and "Stakeholder Collaboration" Assessments could have been a benefit to the development of the Vision Plan, but trying to determine how to implement that process with all of the other "moving parts" would have been extremely difficult. In the future, though, PlanWorks will benefit HPMPO in other areas of transportation planning, such as with the development and update of its Metropolitan Transportation Plan.