Collaborative Consideration of a Tolling Option

This case study is an excellent example of collaboration when projects change significantly in scope and alternatives. Washington State DOT (WSDOT) initially used PlanWorks Corridor Planning in the beta version to gain consensus from important stakeholders. The PlanWorks Corridor Planning key decisions will be very useful in helping other agencies collaborating for a similar purpose.

The completion of State Route 509 (SR–509) in the Puget Sound region of Washington State was an identified transportation need which had stalled over the years due to lack of funding. The project is a large–scale project which failed to receive enough financial support to be completed, until it was funded by the state legislature's Connecting Washington transportation package in 2015. This funding included local contributions, gas tax and a tolling element. Tolling enabled a four lane facility to perform, reducing the scope and helping cover the costs of construction and operations. Washington State Department of Transportation (WSDOT) participated in an early pilot of PlanWorks, to test working with partners and stakeholders in considering tolling and phasing options. By following the Decision Guide process for Corridor Planning, WSDOT brought in new stakeholders early in the process to develop a plan for phasing SR 509 with a reduced scope. As tolling had not previously been considered for the project, stakeholder support was critical. After the pilot, WSDOT combined the SR–509 project with a related project for State Route 167 (SR–167) to create the Puget Sound Gateway Program and received funding to complete both as one Program. Although some of WSDOT's planning processes had changed since the earlier pilot, WSDOT continued the strong collaborative process through the joint project phasing and NEPA re–evaluation process.

In the 1990s, WSDOT began studies for SR–509 and SR–167 in order to complete major links between Puget Sound marine ports and regional industrial areas, as well as an important connection to the Sea–Tac International Airport. While both projects demonstrated solutions to regional congestion and critical gaps in the transportation network and both had completed NEPA Environmental Impact Statements (EIS), they stalled for years primarily due to their large funding requirements.

In 2011, WSDOT was selected to pilot the earlier version of PlanWorks. WSDOT used the Decision Guide Corridor Planning process to define a Phase 1 of the project for implementation by reducing the number of lanes and introducing tolling. According to the 2013 Gateway Concept (described below), Phase 1 of the SR–509 project extends SR–509 south for three miles , and connects with Interstate–5 with four additional miles of widening. Specific plans for tolling and managed lanes were not defined at this point. Using this approach, WSDOT hoped to make the project scalable and more feasible for funding and implementation. The Decision Guide and other features were helpful in working with stakeholders to identify needs and priorities, and determine a new scope for the project.

In 2015, the Gateway Program was funded with a new state gas tax of $1.5 billion over a 16–year period with additional required local jurisdiction contributions of $130 million and a tolling contribution of $180 million. This funding allowed WSDOT to move forward with the two projects, however, significant effort was still needed to:

The Washington State Legislature's intent was for tolling to help pay for the construction of the projects. WSDOT now needed stakeholder and public support for two very large projects located in different districts of the State, the Olympic and Northwest Regions. Although the joint projects would serve to meet similar goals, reaching consensus on scope and securing stakeholder support would be a challenging task.

PlanWorks began as a research product of the SHRP2 Capacity Program and was originally called Transportation for Communities—Advancing Projects through Partnerships (TCAPP). Its purpose was to develop a framework that would allow institutionalizing collaborative decision making within transportation planning. WSDOT's efforts in the TCAPP pilot for SR–509 were foundational in continuing and expanding the collaboration required to refine and gain support for the SR–509 and SR–167 components of the Puget Sound Gateway Program.

In order to define Phase 1 of the SR–509 project as an acceptable plan for all stakeholders, WSDOT focused on identifying key stakeholders with the ability to stall the project and conducted a stakeholder assessment. In general, SR–509 was viewed by stakeholders as a favorable project, however, there were some concerns about tolling and potential spillover traffic into communities. Identifying stakeholders representing the full range of perspectives was important to WSDOT during in the development of the environmental impact statement (EIS) in the 1990s. After conducting the assessment, WSDOT expanded their list of stakeholders participating on the steering and executive committees to include residents, and members of the freight and local business communities.

The WSDOT SR–509 Project Team worked with the executive and steering committees through the Corridor Planning key decisions and the first key decision in the Environmental Review phase. The steering and executive committee determined an agreed–upon set of project goals, which helped guide the scope for Phase 1. They also developed criteria to evaluate phasing and tolling options; however due to time and resource constraints, these were only applied to the phasing options. The TCAPP Performance Measures Application was used to inform their development of specific measures for the project. Using these performance measures, the project team analyzed a set of phasing options which were developed under consultation with the steering committee, following the agreed–upon goals. Based on this analysis, the executive committee endorsed the steering committee's recommendation for Phase 1.

Although an EIS had been prepared previously for the SR–509 project, the change in scope and addition of tolling required a re–evaluation. While recommended options for tolling were not determined in the TCAPP pilot, the project team followed the Environmental Review scoping key decision (ENV–1) to develop a list of issues required for re–evaluation. TCAPP provided guidance to the project team regarding agencies to coordinate with and data and analyses needed for the re–evaluation. At the conclusion of the TCAPP pilot, the plan and approved Phase 1 were submitted to the Washington State legislature to await funding.

Despite the decisions reached in the TCAPP pilot, the SR–509 project remained unfunded. In 2013, WSDOT elected to combine the SR–509 project with the SR–167 project, which would serve a joint goal of connecting the ports of Tacoma and Seattle to each other and to key industrial areas in the region. WSDOT produced a report on a joint program, which included recommendations for Phase 1 construction and tolling options. Both projects would realize efficiencies in planning and project delivery to save costs and focus support for a combined regional project. The combined projects were called the Puget Sound Gateway Program and were funded through a major state revenue package in 2015.

State funding for the Gateway Program was to be delivered in phases over 16 years, with the assumption that a portion of construction costs comes from local matches and tolling revenue. Once funded, WSDOT moved forward with executive and steering committees for both projects to refine design concepts and make key decisions on funding and construction phasing. 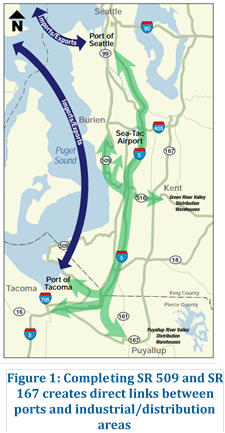 Building trust between WSDOT and the stakeholders as well as among the stakeholders was an important theme throughout the Gateway Program Practical Design process. The planning process included high levels of transparency, early inclusion of key stakeholder voices in decision making, and identifying shared goals. Early on the project team conducted a bus tour of project locations for the executive and steering committees of both projects to prompt discussion and dialogue in the field.

Identifying key stakeholders was an important part of the success of the Puget Sound Gateway Program. During the TCAPP pilot, one of WSDOT's first activities was to conduct a stakeholder evaluation to identify stakeholders who would be impacted by the project, as well as all stakeholders with the power to stall or delay the project. Bringing in all voices and perspectives early in the planning process helped build trust among stakeholders and address concerns before significant work was accomplished.

Each project had both an executive committee and steering committee, which served as the primary stakeholders for the projects. The executive committee represented 26 entities largely comprised of local decision makers, including mayors, county leaders, port leaders, tribe, and transit agency leaders. The Washington State Transportation Commission and FHWA leaders also participated. The role of the executive committee was to provide feedback on the plan and implementation and build consensus with local stakeholders.

State funding for the Gateway Program was dependent on local contributions of $130 million. For a Program of this size, soliciting and securing local contributions proved to be a challenge, especially in determining the amount of funding each of the 18 jurisdictions adjacent or affected by the project felt comfortable contributing. Through a series of five meetings, the Gateway Program team worked with local leaders and the steering/executive committees to identify a process to obtain local funding in a way that was mutually beneficial and satisfactory to everyone. 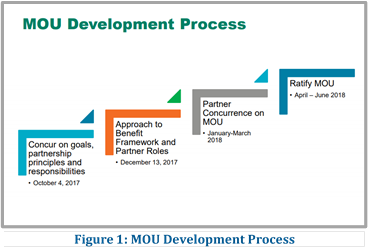 All 18 jurisdictions signed a memorandum of understanding (MOU) outlining planned local contributions in support of the Gateway Program (Figure 2). [3] Included in the MOU was an agreement to contribute funds, in–kind donations, and coordinate grant applications for local projects to avoid competition that would hinder progress of the Gateway Program.

Inclusion of key and diverse stakeholders early in the planning process helped bring all voices and perspectives to the process, which informed WSDOT of challenges, pushbacks, ideas, and local priorities.

WSDOT worked with local stakeholders to clearly identify benefits to local communities. They received support for the project as a whole, including financial contributions. It was also essential that they specifically addressed elements which were considered high priority both for the overall project and for local communities.

Clear and transparent dialogues that WSDOT facilitated about the project's funding mechanism, effects from tolling, and expected benefits helped bring support for a large and controversial project.